Burger King Brazil is now accepting Dogecoin as payment for a “Dogpper,” an unique edible doggie treat for customers’ canines that is a play on words with the fast-food chain’s famed Whopper burger. 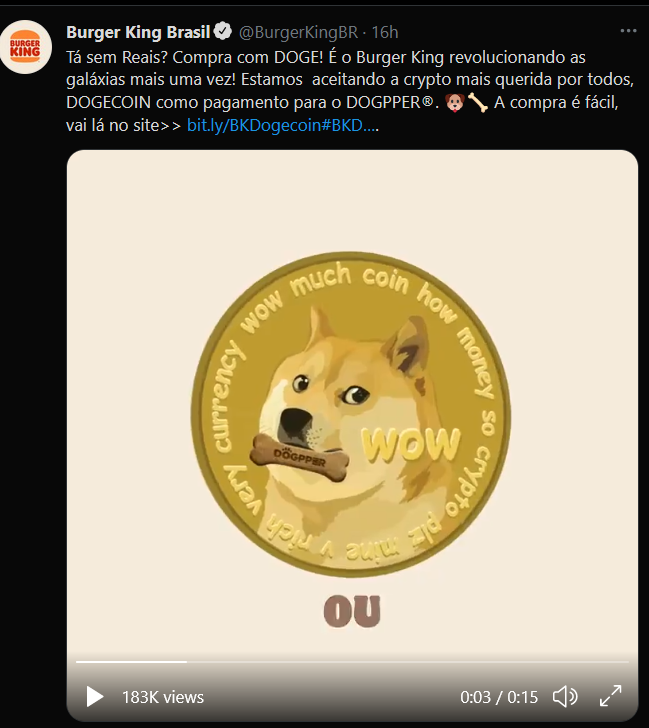 “Are you out of Reais( Brazilian currency )? Purchase with DOGE! It’s Burger King revolutionizing galaxies once again! We are now accepting the most beloved crypto, DOGECOIN as payment for DOGPPER®. 🐶   Purchasing is easy”, They said in tweet

The Whopper for dogs, dubbed the Dogpper, is now available in numerous configurations, allowing pet owners to share their munchies with their “dogs.” Despite the novelty, animals are still barred from entering Burger King restaurants according to current legislation. As a result, Dogpper can only be purchased through home delivery.

Burger King did not indicate plans to accept other cryptocurrency for its dog chow or any other menu item while joining the Dogecoin craze.

On Monday, Dogecoin’s price jumped over 15%, possibly in response to Bitcoin’s unexpected rebound to above US$40,000 for the first time since June. However, as Bitcoin has continued to rise, DOGE has swiftly fallen back to near its pre-rally level and is currently trading at US$0.206, according to statistics.

@MooMonsterNFT I hope this project is a success sir, and then it becomes one of the best cryptos,I am enthusiastic about participating in this.

What are NFT #marketplaces?